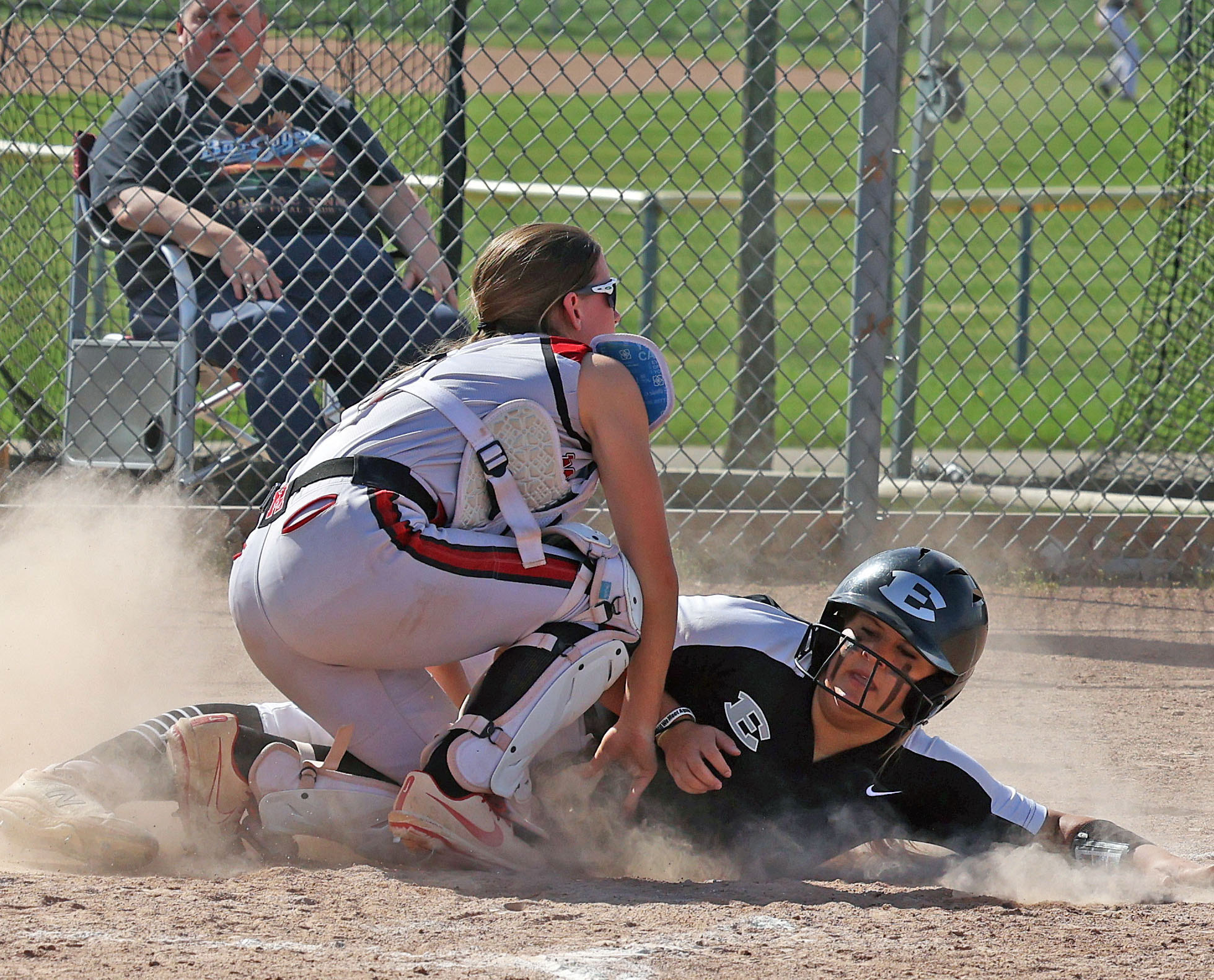 South Lyon East sophomore Kate Brigmon slips under the tag of Milford wide receiver Camryn Keogh in the Cougars’ 13-0 win over the Mavericks on Thursday, May 12 at East. (Special for The Spinal Column Newsweekly/CHRIS WALL) 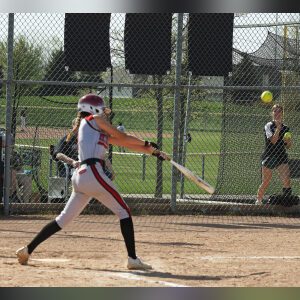 Taylor Mitchell of Milford drives the ball to left field in the 13-0 loss to South Lyon East on Thursday May 12 in the first game of the double bill. (Special for The Spinal Column Newsweekly/CHRIS WALL)

After a double sweep at Walled Lake Central on May 10, Milford had a tough afternoon dropping a double bill at South Lyon East on a sunny afternoon in East on May 12.

South Lyon East used the long ball in the opener to shut out Milford, 13-0. Alyssa Lemmon, Paulina Ankawi and Claire Loveland all homered while Delaney Lis and Kaitlyn Solberg combined in the circle to limit the Mavericks to three hits in Game 1.

Loveland started with a sharp single to center field and scored on a long home run to left field by Lemmon to give the Cougars an early 2-0 lead. Anna Lassan opened the bottom of the second with a single and scored on an imposing home run to left field by Ankawi to give South Lyon East a 4-0 lead. Loveland followed with a three-run homer to give the Cougars a 7-0 lead.

South Lyon East reached the final 13-0 collecting 18 hits to earn their ninth victory in the LVC.

Lis was happy with her performance in the circle in the first game. “My ascent was really meteoric today. I knew it was going to work really well. The curve is always my strong point, and it was also working really well today, a bit high today but it was still good enough.

“I want to take our strikes out of this game. I think we hit the ball really well and we worked as a team and our energy was up the whole time. I’m really proud of the way we played.

Milford fought back in Game 2 behind Taylor Mitchell and rookie Marisa Merz who both went three-for-four at the plate but fell short dropping the nightcap, 9-4. Merz had been on fire at home plate, bringing his sparring average to .564 to go with nine homers so far.

“Plus, she’s been a solid defensive third baseman for us all season. Merz is a breath of fresh air for a coach. She’s a hard worker, easy to coach, a team player and just a good girl in every way.

Mitchell led Game 2 with a single to left field and headed home on an RBI single to right field by Merz to give the Mavericks a 1-0 lead. The Cougars came back to even the score at 1-1 late in the first. 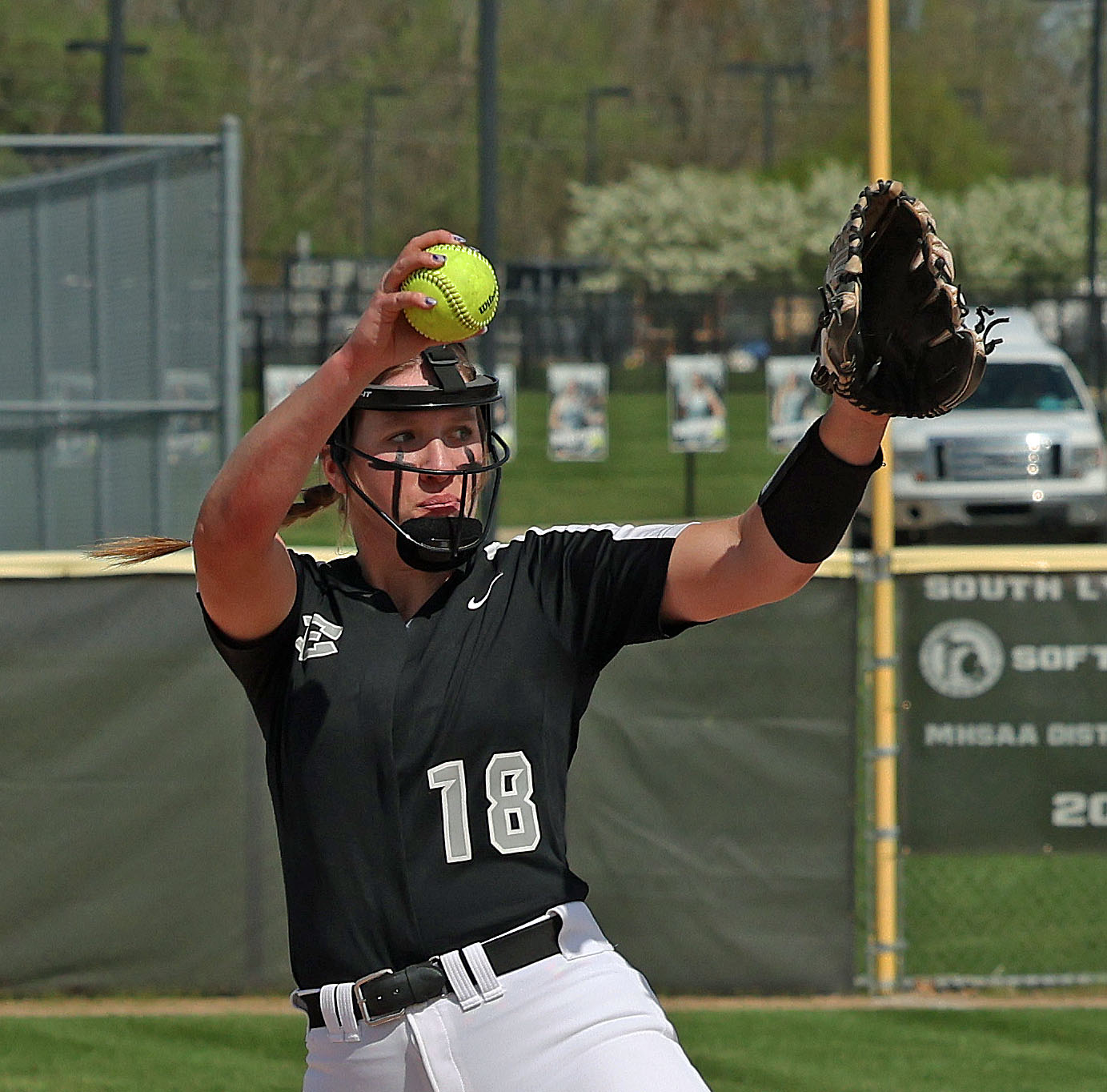 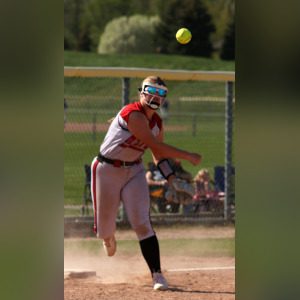 Sud Lyon Est took the lead in the second set, erupting for four runs. Lemmon drew a goal-laden walk to pick an RBI as Emma O’Donohue scored for a 2-1 lead.

Rachel Pennington scored on a sacrifice fly from Lis, and Loveland came home on an error to make it 4-1. Sophia Propp’s single line drive went 5-1. Merz started the fourth with a single and came home on an RBI brace from Reese Hefke to cut the deficit to 4-2. Sud Lyon Est added five more points late in the fifth to move up 9-2.

Milford’s Kayla Hulswitt and Taylor Mitchell had back-to-back singles in the top of the eighth. Hulswitt scored on a defensive choice and Merz doubled to right field to lead Mitchell to the final 9-4.

“Game 1 was a tough loss,” Davis said. “I certainly don’t like to lose, but if the other teams win it, and East did. I was proud of the girls for bouncing back in game two. We made the bats walk a bit more, but not enough.

“The team has come together over the past few weeks. We really focused on team spirit, playing for our teammates and having fun on the pitch. The atmosphere has changed and it’s fun to watch them grow together.

Loveland had a big game in Game 1 going 4-4, including an impressive three-run homer, while Lemmon went 2-4, including a homer for the Cougars. Sud Lyon Est head coach Paul Nieto was happy with two wins.

“We’ve been really focused on our striking over the past few weeks,” Nieto said. “Our girls have worked hard and we are starting to see positive results. Girls square the ball and make solid contact.